The detection of gravitational waves

Posted on March 3, 2016 by sarahmaddison

About 1 billion years ago, two black holes orbiting each other finished their mutual ‘death-spiral’ and coalesced. Prior to the final merger event, during their mutual orbit they lost rotational energy, which made them move closer together and also speed up their orbit, which in turn made them lose more energy, etc. … resulting in a runaway merger.

The merger was over in a fraction of a second and the result was a single black hole with a mass of about 60 solar masses. As the two black holes came together, they orbited at nearly the speed of light. Very massive objects moving extremely quickly tend to buckle or distort nearby spacetime. It was an incredibly energetic cosmic event in which about 3 solar masses were converted into energy in only 0.1 seconds. The final death-spiral and resultant black hole merger propagated energetic waves, gravitational waves, through space.

Gravitational waves alternatively squeeze and stretch spacetime. In the plane perpendicular to the direction the wave is travelling, space is stretched along one axis and compressed along the orthogonal axis. One half-wave cycle later the opposite occurs. (Credit: M. Pössel/Einstein Online)

On the 14th of September, 2015, the Advanced Laser Interferometer Gravitational-Wave Observatory (aLIGO) laser interferometers in Louisiana and Washington state in the USA, which are separated by 3000 km, almost simultaneously detected a signal characteristic of a pair black holes merging into one. It was the event, described above, that occurred about 1 billion years ago. 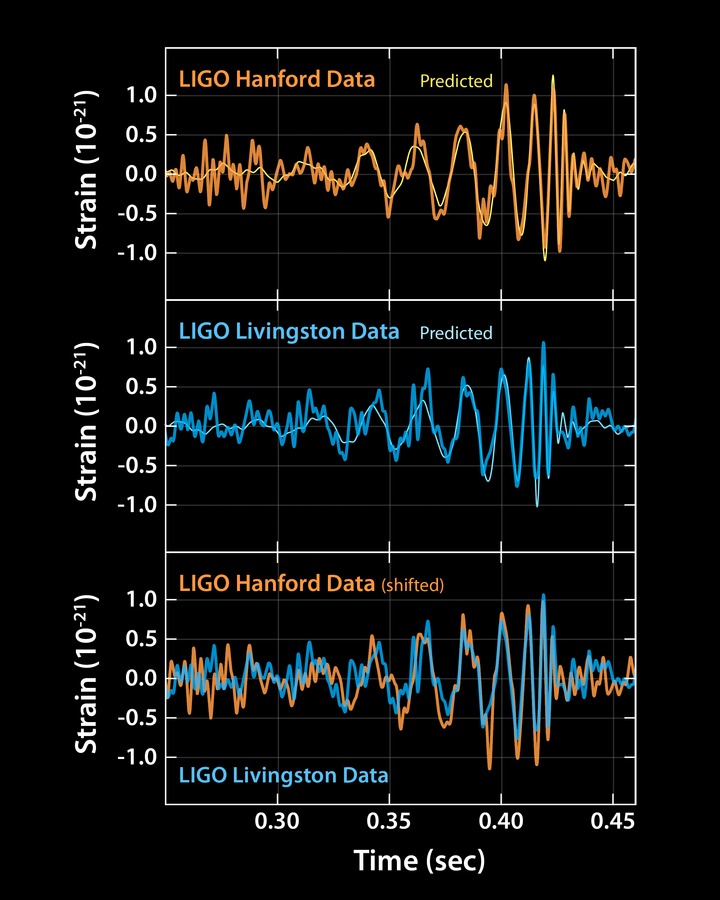 The signals of gravitational waves detected by the twin LIGO observatories at Livingston, Louisiana, and Hanford, Washington. The signals came from two merging black holes, each about 30 solar masses. The top two plots show data received at Livingston and Hanford, along with predicted waveforms showing what two merging black holes should look like according to the General Theory of Relativity. Time is plotted on the X-axis and strain on the Y-axis. Strain represents the fractional amount by which distances are distorted. The bottom plot compares data from both detectors. The Hanford data have been inverted for comparison, due to the differences in orientation of the detectors at the two sites. The data were also shifted to correct for the travel time of the gravitational wave signals between Livingston and Hanford (the signal traveling at the speed of light, reached Hanford seven thousandths of a second later than at Livingston). (Credit: Caltech/MIT/LIGO Lab)

Gravitational waves are a direct consequence of Einstein’s General Theory of Relativity. However their strength or ‘amplitude’ was considered so small, many, including Einstein, doubted the waves would ever be detected.

Long baseline gravitational wave interferometers like aLIGO use laser beams in evacuated tubes reflected by mirrors to test the path length of the subsequent laser path. Two tubes at right angles are used.

The end mirrors follow the stretching and compressing of spacetime from a gravitational wave. As a wave passes through Earth, the distance between one pair of mirrors in one tube gets smaller, while the other gets larger. Yet even the strongest gravitational waves expected on Earth by various merger events stretch space by an extremely small amount: The strain (change in distance divided by the distance) between two objects is expected to be less than 10-18. To make the change in distance large enough for an interferometer to detect, designers must make the laser baseline kilometres in length. As well, in aLIGOs case the sensitivity to detect small values of strain had been vastly improved over earlier instruments.

Apart from the minute strain measurement needed, binary merger events like black hole mergers that undergo an accelerated inspiral orbit produce a characteristic ‘chirp’ waveform whose amplitude and frequency both increase with time until eventually the two bodies merge. The merger results in a highly deformed single black hole which rids itself of its deformity by emitting gravitational radiation that is characteristic of the mass and spin of the final black hole. This is called the ring-down signal.

The waveform as predicted by analytical approach of Buonanno and Damour (1999) to the binary black hole problem. The chirp and ring-down is seen. (Credit: Cardiff University)

The aLIGO detectors were just firing up again after a five-year, $200-million upgrade, which equipped them with new noise-damping mirror suspensions and an active feedback system for canceling out extraneous vibrations in real time. The upgrades gave aLIGO a major sensitivity boost.

It matched the waveform predicted by the General Theory of Relativity for the inspiral and merger of a pair of black holes and the ringdown of the resulting single black hole.

This detection adds to a growing list of recent ‘major’ scientific breakthroughs that have attracted major media attention. Some add it to an increasing number of discoveries that may even cause the public, politicians and even funding bodies ‘breakthrough fatigue’. The detection of gravitational waves is however truly a major discovery.

The magnitude of such scientific discoveries are judged by the awards and prizes given by peers. It is very likely that the next Nobel Prize for Physics will be awarded to (up to three) researchers associated with aLIGO and gravitational wave research. Stay tuned for the October announcement from Stockholm.

This entry was posted in Uncategorized. Bookmark the permalink.