Posted on March 2, 2012 by sarahmaddison

To date there are 760 confirmed extrasolar planets. While massive planets (about a Jupiter mass or more) close to their host star (within a few AU of the star) still dominate the population of confirmed extrasolar planets, over the past few years astronomers have been discovering “super Earth” (planets with masses between one and ten Earths) and recently some planets with masses less than that of our Earth have been discovered.  But are these planets with a mass close to the Earth in any way “Earth-like”?

In our Solar System we have three main groups of planets: the rocky terrestrial planets (Mercury, Venus, Earth and Mars), the gas giants (Jupiter and Saturn), and the ice giants (Uranus and Neptune). If we know the mass and size of a planet, we can determine its bulk density which can help us determine what type of planet we’re dealing with.  The bulk density of the Earth is 5.5 g/cm3, while the bulk density of Jupiter is 1.3 g/cm3.

When we say “Earth-like” most people think of a planet with a rocky planet with a similar mass and size to the Earth.  So knowing the size of the newly discovered Earth-like planets can tell us of their bulk compositions – whether they are made of rock or ice or gas. And if they’re made of rock, are they mainly silicate like the Earth or are they something else all together – iron planets maybe, or carbon planets? The size and mass of an Earth-like planet provides clues about its bulk composition. (Credit: Marc Kuchner/NASA GSFC)

The main goal of NASA’s Kepler mission is to search for habitable planets, or more specifically to estimate the number of Earth-sized planets in habitable zones of their stars in our Galaxy.   The transit technique used by Kepler determines the size of the planet, and Kepler’s great sensitivity allows astronomers to find smaller planets. In December 2011, the Kepler team make two very exciting announcements: the discovery of two Earth-sized planets Kepler-20e and Kepler-20f (but  too close to their host star to be in the habitable zone), as well as the first planet in the habitable zone, Kepler 22-b (but its mass, nad hence density, are not yet known). Of the 2,326 Kepler planet candidates, 37% are Earth and super-Earth sized. But are they Earth-like? 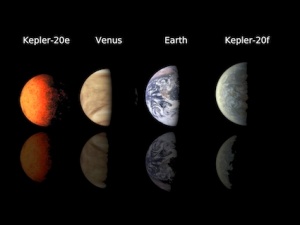 In a paper published this week in Astrophysical Journal Letters, Jade Carter-Bond and collaborators demonstrate that whether or not an Earh-sized and Earth-mass planet is really “Earth-like” (meaning a rocky planet of about the same size and mass as the Earth and having a similar composition) depends on the composition of the nebular gas out of which it formed. And more specifically, it depends critically on the ratio of carbon to oxgyen (which controls how much water there is and how much carbon the planets can be made from) and the magnesium to silicon ratio (which controls the amount and type of silicates available for the planets, which will effect plate tectonics and volcanism in the rocky planets, which in term effect atmospheric compositions).   It may well turn out that there are many flavours of rocky planets in our Galaxy and that “Earth-like” is just one of many possibilites.

This entry was posted in Uncategorized. Bookmark the permalink.